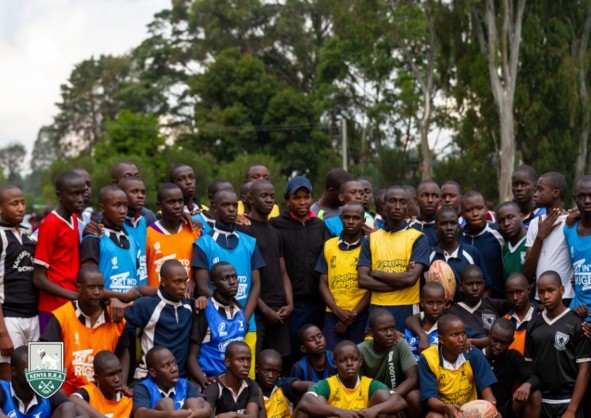 2019 was the second edition of the HP camp since 2017 that Kenya has hosted before the inaugural 7’s series where 16 first division teams and 24 second division teams all gather for a six-leg competition hosted in different venues in order to compete for the series title. There were 20 referees invited to the camp, which consisted of division one referees, division two referees and future developing referees that got the opportunity to partake at the camp. The camp was based at the home of champions, which is a famous town called Kapsabet as it is known for producing all the famous Kenyan runners, and Olympic champions. The idea behind the camp was to upskill the referees by providing them with resources that they were not exposed to before. So the Kenya Rugby Referees decided to invite Rasta Rasivhenge from South Africa as he is known from the HSBC World Sevens Circuit. He also refereed in the 2016 Olympic gold Medal final in Rio, two Sevens World Cup finals in Moscow 2013 and also in 2018 in San Francisco.

Also present was Johnbosco Muamba who has refereed several test matches in Africa and is currently Rugby Africa’s Regional Development Officer in the English Speaking Countries. Other notable members present were Kenya Rugby Referees’s Association(KRRA) Secretary General Alfred Okwemba, KRU’s Training and Education Coordinator George Ndemi and local facilitators/Educators. The three-day camp began with introductions from all referees and officials that would be involved in the camp, which was followed by the key topics that would be covered over the course of the camp. These main topics were centered on Decision making skills, mental skills, Set phases, strength & conditioning and finally team activities to build a strong squad for the 2019 National Sevens Circuit. The camp turned out to be a momentous occasion as the participants dived deep into learning and extracting as much as possible in a short space of time. A forensic analysis was also conducted on past tournaments and where the group is at currently: which helped establish the strengths and key work on’s that would help improve the individuals in their quest to be better referees holistically. Each day was packed but the most satisfying element of the camp was the fact that the referees brought in great camaraderie and enthusiasm, which made it an absolute pleasure to work with them. The main theme of the camp was centered on:  “The referees must do their best on the field as the players want the referee’s best effort”. This was evident in the way the referees conducted themselves at the camp, which brought in an abundance of zest in all activities that management had planned and executed. Throughout the camp, there was also great opportunities to conduct outreach programs such as the I ALSO PLAY REFEREE program, which is spearheaded by Johnbosco. The purpose of the program is to recruit youngsters whilst they are in school to play and referee at the same time. It was a great opportunity to go to Kapsabet High school and conduct the program in front of hundreds of scholars who played rugby in their different age groups. This worked very well as the learners were interested in the project. It was a major success as Rasta Rasivhenge presented the school with an “I ALSO PLAY REFEREE” kit that was provided by Johnbosco. The success of the program has produced upcoming stars like Lawrence Ishuga who represented both his school and Club side Nakuru RFC at 1st xv level. He is one of the upcoming bright prospects that participated in the program and KRRA and KRU are delighted to have him as an ex-player and program graduate in their systems.