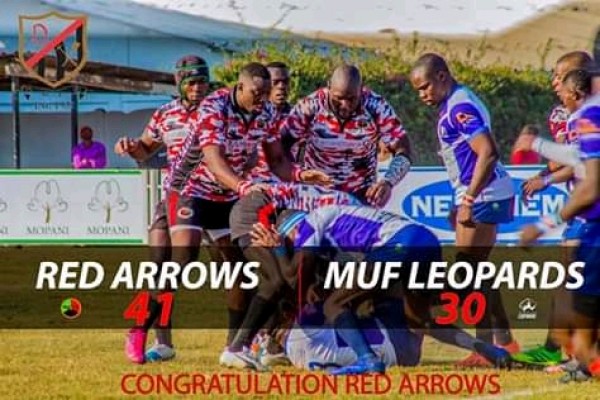 The 2019 Zambia Rugby 15 a-side League finally came to a close on Saturday 6th July, 2019 in a grand finale which pitted two of the fiercest teams in the local league namely Red Arrows and Mufulira Leopards.

Red Arrows who have been champions since 2013 after dislodging Diggers Rugby Club once again proved why they have held on to the Championship Trophy for so long in a hard-fought victory over Mufulira.

The Championship Cup games, which raised alot of banter on the local scene, had divided opinions among fans and supporters with some expecting either one of them to win.

The defending champions imposed their dominance on the game with a try each from Vincent Nkole, Israel Kalumba, David Chimbukulu, Pekah Phiri, Brian Mbalwa. Brian who was voted Man of the Match also contributed 3 conversions plus penalties. Terry Kaushiku also added a penalty goal to ensure the airmen were beyond reach from the oppornents.

Meanwhile, the men from the Leopards Cage managed to score tries each via Gabriel Mungalaba and Mike Masabo while their playmaker Fine Chikumbe scored 1 conversion and penalties.

The finals which were played in Kitwe at the Diggers Rugby Club also hosted the Challenge Cup game between Lusaka Rugby Club versus Chibuluma Rugby Club saw the latter being crowned champions with a 32-03 scoreline.