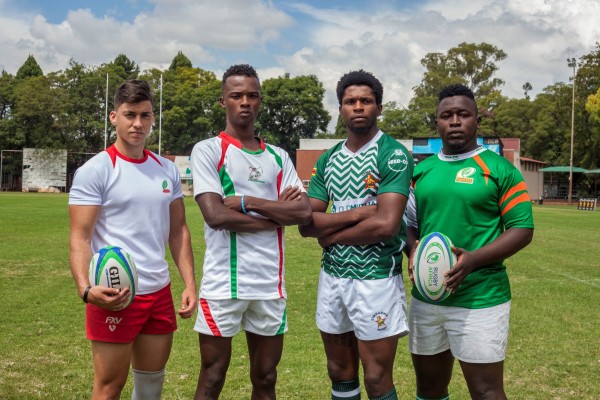 All four captains of the participating nations in Group B of the Rugby Africa Barthés Cup are upbeat ahead of the opening round of matches at the Jubilee Field, Prince Edward High School in Harare, Zimbabwe on Wednesday (April 17).

Zimbabwe this year hosts the group comprising of Ivory Coast, Madagascar and Morocco.

This is a crucial stage for all four teams as this will determine which team is promoted into Group A.

Speaking at the captain’s press conference at the match venue Zimbabwe captain Tonderai Chiwambutsa said the Young Sables are relishing the opportunity to play in Rugby Africa’s only junior competition:

“I am honoured to play in such a competition and as a team we are grateful be hosting and we would like to thank our sponsors SeedCo and Old Mutual for making this possible.”

This year’s edition is composed of three ranking-based groups in which each team will play two matches, Loser 1 and 2 will play in the first match while the winners play in the second match.

Morocco’s Captain Aayoub Jalli is upbeat about a positive result as they face Madagascar in the second Group B match tomorrow.

“We are going to give a good performance that will keep us in this competition. This competition is a good platform for young players from Morocco to show case our talent and show the world what we can do,” said Jalli.

Madagascar had a chance to practise at Prince Edward on Monday and were in high spirits, they relish the platform to perform against some of Africa’s biggest teams through the Barthés Cup.

“Our objective is to give our best and play to our strengths. We have a good team and it will compete well against the guys in our group,” said Madagascan captain Raoelinirina Jean Marc.

All eyes will be on the Ivorian match up against hosts Zimbabwe as the opening Group B match tomorrow, Ivory Coast skipper Cheick Diallo promised to bring a forceful game to the hosts.

“This is a very important tournament for Ivory Coast, it will be a tough one against these teams but we will give a good game tomorrow and try to top the group. We are here to taker this cup,” said Cheick.

APO Group 1st November 2019
We use cookies to ensure that we give you the best experience on our website. If you continue to use this site we will assume that you are happy with it.Accept